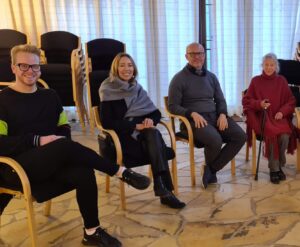 From left to right:

Michael Bascom: after the premiere of his first opera «Text», in July 2021, he is now working on an electronic album, setting a series of poems by poet Clare Best  —former resident of our Residence in 2017.

Maureen Hodgan, from Canada, works with Cam Christiansen on his new film about Music.

Cam Christiansen came to the Foundation to work on his film about Music. He recorded a flamingo concert during his stay, as well as a concert in the streets of Mojácar and numerous other shoots around Andalusia.

From left to right: 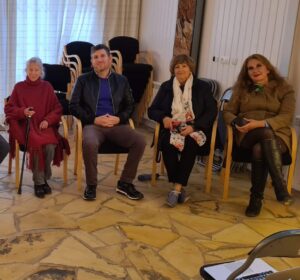 Alberto Bile is an Italian playwright and translator. During his stay he worked on his monologue-play  “La ragazza con la Diez”, about women’s football, as well as on the translation of  “El gran Burundún” by Jorge Zalamea.

Marta Jordan is a translator, specialised in theatre. During her time with us, she worked on the translation into Polish of the work of Alberto de Casso’s «La tarde muerta». Alberto de Casso won our Beckett Theatre Prize in 2011 with his play «La seducción de eunuco».

Maria Dubin started a whole new body of work: a series of pencil drawings from the Valparaíso garden and ten pastel paintings of the surrounding mountains. She will develop more work from this base. Her upcoming show at the Peltier Gallery in Copenhagen in May 2022 will be a homage to this stay.